Travel by Haiku Volume 6-10: Far out on the Road With Friends (A Freedom Books) 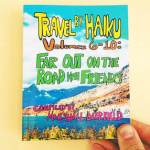 Marshall Deerfield’s Travel by Haiku Volume 6-10: Far out on the Road with Friends is part of a larger project that mixes haiku and haibun to create an ongoing travel narrative over multiple volumes. It comes out of a tradition from writers like Basho, Snyder, and Kerouac, but it has its own environmentalist edge prompted by what we have learned about the destruction of the natural environment and how the American West, which is the focus of this collection, is being transformed by forces like drought, climate change, and the pine bark beetle. However, it is not only a look at the destruction of the west; it is much more a celebration of how life can be lived with a kind of joy on the road. Marshall Deerfield edited the volume, and it is filled with his work and the work of his friends as they engage is these road trips.

What struck me immediately is how this feels like the volume that might have been written by a side character in Jack Kerouac’s novel Dharma Bums. It has that kind of enthusiasm for life and travel. Some of my favorite haiku in this vein are:

water so cold that it stings

A lake so blue that

There is a joy here for nature that is infectious. With the haibun, these haiku create a narrative of young people going into the new American West to find what remains to take pleasure in. Much of what we have read in older works that have the same kind of approach is gone. Times have changed and we have lost that world. Deerfield is trying to find what is there now and how to lose himself in these places.

Deerfield also makes the point of discussing the environmental destruction that continues to plague the American West. As they drive through Texas, he writes, “This is the Gulf of Mexico. To get here, I had to ride through a literal ring of fire made up of oil refineries with their smoke stacks spewing blue, green, and red flames up into the heavens” (18). He also discusses the rise of the pine bark beetle. The beetle is a creature that lives in all pines and has for a very long time. By itself, it is not a problem, but drought, climate change and the overproduction of trees because of bad fire policy has caused the beetle to turn forests into places of tree death. In most western forests currently millions of trees stand dead and brown sprinkled among living trees. Deerfield writes,

As an ecoactivist, I never thought a forest’s demise would come from inside of it. These pine bark beetles are unlike any bulldozer or logging caravan. Chaining yourself to a tree to protect it has no use if the tree is being eaten alive from within (102).

In this, Deerfield expresses the frustration of the environmentalist raised on Edward Abbey but facing the reality that it is not just one person or company harming the natural world. It is a way of life that cannot be easily amended.

Travel by Haiku Volume 6-10: Far out on the Road with Friends is a balm for me now in this time when I cannot travel because of the quarantine. It helps me to live through his journeys and it brings me back to my own.