All The Colours Fade

In an interview with Robert Robertson (author of Eisenstein on the Audiovisual, 2009) James Wilson suggested that ‘the whole art form of cinema is one of symbolism’ and went on to comment on the director’s theories of montage. After reading those lines in Images of the Afterlife in Cinema (Duchy of Lambeth 2011, ISBN 978-0-9558525-2-7) it comes as no surprise to open this startling and impressive new volume from James Wilson, All the Colours Fade (Hippocrene Society 2012, ISBN 13: 978-0-9826971-2-2), and be confronted by the atmospheric and the visual:

‘It starts with a rendez-vous in the desert. He said he had an offer that was too good not to be heard. Arriving in a cloud of dust and a retinue that vanished into thin air, he was suddenly standing next to me in the wilderness, beaming an unholy smile.’ 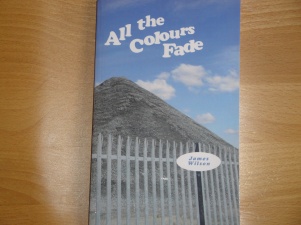 This volume contains short stories and prose poems which are filtered through the prism of the seminal band The Stone Roses. Taking their cues from imagery inspired by both music and lyrics, the pieces in this collection explore a personal palimpsest of influences, memories and dreams. There is an infectious and compelling tone to these pieces where the inspiration is both Camus and Maupassant. And there is a lightness of touch that belongs to Ariel: ‘I spin around the island and in an instant I am back.’

All the Colours Fade is available now from Amazon at £5.62 post free.