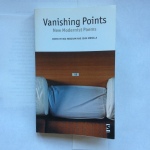 The moment of change between one century and another is no easily defined discrete box into which ideas can be crammed later to become defined as Twentieth Century as opposed to Twenty-first Century. Thomas Hardy knew this well when he published his much anthologised poem ‘The Darkling Thrush’ on December 31st 1901. The poem looks forward to the newly defined Twentieth Century with a limited sense of blessed hope “whereof he knew but I was unaware” whilst also looking back at the Nineteenth Century’s corpse “outleant”. This sense of one eye being cast over the shoulder whilst the other is fixed firmly ahead is the hallmark of the Salt anthology of poems, Vanishing Points, edited by John Kinsella and Rod Mengham and published in 2004.
The backwards glance is towards the anthology Conductors of Chaos, edited by Iain Sinclair in 1996 in which, as Randall Stevenson suggested in Volume 12 of The Oxford English Literary History, there was a clear attempt to make great demands on readers to ensure that they “looked at the language on the page—rather than through it, towards a familiar, represented reality—transparency and ease of ordinary understanding had to be eliminated as far as possible”.
Sinclair’s introduction to Conductors of Chaos had thrown down a glove for the editors of anthologies and for serious readers of modern poetry:

“The work I value is that which seems most remote, alienated, fractured. I don’t claim to ‘understand’ it but I like having it around. The darker it grows outside the window, the worse the noises from the island, the more closely do I attend to the mass of instant-printed pamphlets that pile up around my desk. The very titles are pure adrenalin; Satyrs and Mephitic Angels, Tense Fodder, Hellhound Memos, Civic Crime, Alien Skies, Harpmesh Intermezzi, A Pocket History of the Soul. You don’t need to read them, just handle them: feel the sticky heat creep up through your fingers. If these things are ‘difficult’, they have earned that right. Why should they be easy? Why should they not reflect some measure of the complexity of the climate in which they exist? Why should we not be prepared to make an effort, to break sweat, in hope of high return? There’s no key, no Masonic password; take the sequences gently, a line at a time. Treat the page as a block, sound it for submerged sonar effects. Suspend conditioned reflexes. You don’t need to sign up for Tom Paulin’s masterclass to reap the reward. If it comes too sweetly, somebody’s trying to sell you something.”

As if to emphasise even more the links between one century and the next, three of the seven titles mentioned by Sinclair were published by Rod Mengham’s Cambridge based Equipage Press and there is perhaps a sense of appropriateness here in his being the co-editor of the first significantly challenging new anthology of the Twenty-First Century. In his introduction to Vanishing Points Mengham takes up the challenge of reading as thrown down by Randall Stevenson, looking at language on the page:

“The vanishing point lies beyond the horizon established by ruling conventions, it is where the imagination takes over from the understanding. Most anthologies of contemporary verse are filled with poems that do not cross that dividing-line, but our contention is that many poems in this volume are situated on the threshold of conventional sense-making. They go beyond the perspective of accepted canons of taste and judgement and ask questions about where they belong, and who they are meant for, often combining the pathos of estrangement with the irascibility of the refusenik.”

The thirty-two poets in this anthology are from Australia, Canada, New Zealand, United Kingdom and United States of America but despite this wide geographical range what binds them together is “a strong insistence on finding ways of continuing and renewing the lyric impulse in poetry in English”. The British contributors include Caroline Bergvall, Brian Catling, David Chaloner, Andrew Crozier, Andrew Duncan, Roy Fisher, Ulli Freer, Tony Lopez, Barry MacSweeney, Anna Mendelssohn (Grace Lake), Drew Milne, Ian Patterson, J.H. Prynne, Peter Riley, Geoff Ward and John Wilkinson. Some of the poems in the anthology are from a much earlier date and Roy Fisher’s The Cut Pages first appeared in 1971 from Fulcrum Press before re-emerging in 1986 as a joint production of Oasis Books and Shearsman Books. Introducing the first appearance of the poem Fisher had told his readers that the “aim in the improvisation was to give the words as much relief as possible from serving in planned situations” and that the work “was taken forward with no programme beyond the principle that it should not know where its next meal was coming from”. This method of composition “produced very rapid changes of direction”. More on the cusp of the millennium Barry MacSweeney’s ‘Totem Banking’ and ‘I Looked Down On a Child Today’ were both written in 1998-1999 and included in his posthumous selected poems, Wolf Tongue, which appeared from Bloodaxe in 2003. ‘Totem Banking’ is dedicated to J.H. Prynne and the appropriate nature of its inclusion in this anthology is emphasised by Mengham’s introductory comments concerning the way in which “writers in this anthology have been part of a process of exchanging ideas manifested in little magazines, in the publishing programmes of small presses, and in the sheer volume of email and internet transactions”. It was Prynne, along with Andrew Crozier, who began much of this exchange of ideas with the creation and publication of The English Intelligencer back in the 1960s and it is a measure of the Cambridge poet’s professional commitment to new forms of writing that an extract from his own Red D Gypsum should form part of the new horizon posited by the editors of Vanishing Points.
Although Red D Gypsum was published by Barque Press (Andrea Brady and Keston Sutherland) in 1998 it was one of the later sequences which prompted Andrew Duncan in 2003 to write “Of course, Prynne’s aesthetic of difficulty often causes panic anxiety, feels like sensory deprivation, and invites misconstruction…people have different perceptions of what ‘good pattern’ is, and may experience incompleteness as anxiety as well as cognitive freedom”. Writing about the sequence in 2009 Nigel Wheale suggested that it is worth thinking about the sense in which reading it “may be a cumulative experience for the reader” requiring a different reading strategy. This, of course, is entirely in tune with the editorial comments in Vanishing Points and John Kinsella, the co-editor, stressed that “Typically, a poem gives the reader or listener something to take away from the text—an emotional gravitas, whimsical joy, intellectual or spiritual connection or awakening”.
At the end of the last century Kinsella had formed a publishing partnership with Clive Newman and Chris Hamilton-Emery and this new Salt Press heralded the world of Print-on-Demand (PoD). The press soon made a name for publishing a pluralist view of poetry and the 2004 publication of Vanishing Points was like the raising of a standard.