On The Royal Road: with Hiroshige on the Tōkaidō by James Bell (Shearman Books) 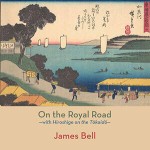 James Bell (1950–2021) passed away just a few months after submitting the manuscript of this collection to Shearsman Books. Some of his poems from the collection had already appeared in Shearsman magazine, and the editor, Tony Frazer, eventually decided to publish Bell’s work together with the pictures of the woodblock prints from Hiroshige’s second Tōkaidō series. The poems are ekphrases that correspond to the pictures of the 53 stations that the artist drew after he had completed the journey from Edo (modern Tokyo) to Kyoto in 1832. He made sketches along the way which were later developed into successful prints that established his reputation. The first series of The Fifty-three Stations of the Tōkaidō was so popular that Hiroshige published 30 more different interpretations of the Tōkaidō during his lifetime in both vertical and horizontal shapes. It was a long-lasting exploration of the highway with its commonplaces and its sense of adventure.

Utawaga Hiroshige (1797–1858) was born in Edo during the so-called Edo period (1603–1867) when Japan was ruled by the Tokugawa Shogunate, a feudal government characterised by relative peace, economic growth and almost complete isolation from the rest of the world. This situation allowed the development of arts and culture in a controlled environment that reflected Japanese traditions in techniques and themes. Society was slow-paced compared with that of today and people’s everyday life was the main focus of stories and pictures. Hiroshige’s artwork reflects this status. Nature is prominent, and there are impressive trees, mountains and rivers. Mount Fuji is often present, smaller or bigger in shape but always the protagonist, as the poems of the collection cleverly underline. The pictures depict different kinds of weather in different seasons, though Hiroshige made his journey in the summer. This changing of the seasons conveys a sense of contingency and sadness, emphasising the transience of every creature. James Bell reflects these concepts in his poetry, re-creating the atmosphere of the Japanese artist’s works by adding unusual descriptions that not only interpret the images but also give a tremendously insightful view:

a spit with another village stabs the sea

dark and light – the straight horizon

The close observation of the different details in the pictures and the consequent comment on the whole of the composition develop a wider view; it is a meditation on what life means for ordinary people and their connection with the environment. The poems evolve in a meaningful exploration that engages both the spiritual and the practical sides of existence. The Tōkaidō road, which was 300 miles long and could normally be covered in about 10 to 14 days, was one of the five roads that joined the two major cities of Japan. People travelled on foot, horseback, wheeled carts and litters depending on their social status. Porters helped them to carry luggage and cross rivers. Such a long journey needed stops to eat, have a rest and socialise. Therefore, travelling along the Tōkaidō was not only a way to reach the destination but also triggered connections, spread news and prompted storytelling in a country in which nothing relevant apparently happened due to its isolation:

on people who pass on the shoreline path

in a quiet scene where nothing much

On the road, people come and go, face the adverse weather and are busy carrying their wares. Stillness or pretended movement characterises some of the scenes. Mount Fuji overlooks humankind benevolently in its unchanging shape. The scenes look similar and yet singular in some details, which are always new in terms of the different perspectives they reveal but which also have repeated themes:

an idyll only in its stillness

the profile of Mount Fuji

Most of the poems have the structure of haiku, that is, three lines and no punctuation. However, Bell interprets the haiku by moving the lines along the page and ignoring the syllable count; in this way, he unleashes the imagination, allowing more freedom and revealing alternative views.

The final poems in the appendix are ekphrases of images from the first Great Tōkaidō ((1833–34). In these last well-chosen and complex pictures, Bell further explores Hiroshige’s art, emphasising once more the imposing Mount Fuji and the sense of adventure when the pilgrims cross mountains and rivers but also the thrill of living an ordinary life when ‘we bear secret witness/to all that is concealed in what is unconcealed’. (‘Wintry Desolation near Hamamatsu – 29th Station’). Dramatic windy scenes are followed by calm passages in which the pilgrims cross a bridge or have a rest under a tree. The everyday evolves and fades in the hours of the day and night and in the passing of seasons that transform the world in a cycle that is never the same but is ephemeral and unpredictable.