Poetry Pairing – A series from the New York Times that links poetry and learning in the classroom. 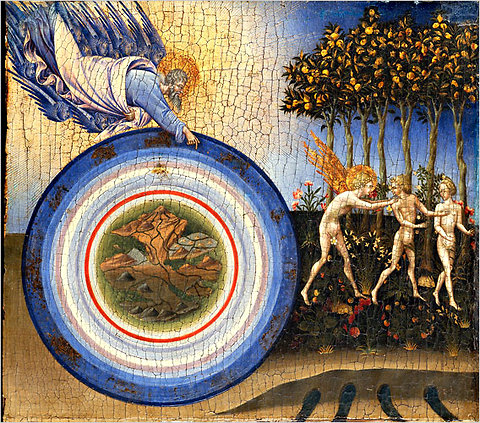 “The Creation of the World and the Expulsion From Paradise” (1445) by Giovanni di Paolo.

Today’s Poetry Pairing matches Jill Alexander Essbaum’s “Precipice” with two New Year’s pieces about time. One, the painting shown above, is from a Dec. 31, 2009 article about representations of time in the visual arts; the other, published this Sunday, is a rumination on our temporal lives from The Stone, a Times philosophy blog.

After considering the poem and related pieces, tell us what you think — or suggest other Times content that could be matched with the poem instead.

The poet and editor Jill Alexander Essbaum writes poetry known for its “remarkable mix of eroticism and religiosity,” writes Rick Marlatt at Coldfront Magazine. Readers may choose to consider her poem “Precipice” in connection with the new year.

The border
of a thing.

Its edge
or hem.

The selvage,
the skirt,

The blow
of daylight’s

And this:
the grim,

That slim
lip of land,

that slips
you past

“On Modern Time,” by Espen Hammer, a professor of philosophy, begins like this:

We live in time. On days like this one, when we find ourselves carried without any effort or intent from the end of one calendar year to the next, this observation is perhaps especially clear.

Our lives are temporal. Time passes, and with that our lives. Dissolving into things, processes and events as the mode of their becoming, time is a medium within which every being is able to exist and develop. Time is, however, also destructive. Its power means that everything, including ourselves, is transient, provisional and bound to come to an irreversible end.

Many philosophers have tried to articulate what it means to be not only temporal but aware of oneself as such. How should we interpret the fact of our own temporality? One response would be that the question is uninteresting or even banal. It simply involves living with clock time, the kind of time that scientists take for granted when they study nature and that we continuously keep track of via our watches and calendars.

So time has passed? You are getting older? It just means that a certain number of homogenous moments (seconds, minutes, hours and so on) have succeeded one another in a linear fashion: tick, tack, tick, tack. … Now look in the mirror!

At least since the introduction of the pocket watch in the 16th century brought exact time measurement into everyday life, modern agents have found themselves increasingly encased in a calculable and measurable temporal environment. We measure and organize time as never before, and we worry about not “losing” or “wasting” time, as though time was a finite substance or a container into which we should try to stuff as many good experiences as possible.

Clock time is the time of our modern, busy and highly coordinated and interconnected lives. It is the time of planning and control, of setting goals and achieving them in the most efficient manner. We move through such time in the same way we drive a car: calculating the distance passed while coordinating our movement with that of other drivers, passing through an environment that can never be particularly significant and which will soon be observable in the mirror.

Modern society is unimaginable without clock time. With the rise of the chronometer came a vast increase in discipline, efficiency and social speed, transforming every institution and human endeavor. The factory, the office, transportation, business, the flow of information — indeed, almost everything we do and relate to is to a greater or lesser extent controlled by the clock.

It was not always like this. In a medieval village, the day started not with the beep of the alarm clock but with birds gradually beginning to twitter, the light slowly starting to shine through the windows. When the observation of natural cycles played a greater role in people’s awareness of temporality, change was “softer,” less precisely calculable, and intimately tied to a more fluid and large-scale sense of rhythm.