Tag Archives: tears in the fence

The Tears in the Fence Flash Fiction Competition is now open with a First Prize of £200, Second Prize of £150 and Third Prize of £100. The winners and other highly commended entries will be published in issue 66. The competition will close on 27th May 2017. Winning entrants will be announced on the Tears in the Fence website https://tearsinthefence.com/flashfiction site on 24th June 2017.

Submissions may be done on http://tearsinthefence.com or by post to Tears in the Fence Flash Fiction Competition, Portman Lodge, Durweston, Blandford Forum, Dorset DT11 0QA, England.

All entries must be unpublished and 400 words or less and the original work of the author.

There is no set Theme.

There is no limit to the number of entries that one person may submit.

Entries may not be submitted elsewhere for the duration of the competition.

This competition is open to anyone over the age of 16 years.

The editors of Tears in the Fence will judge this competition.

The decision of the judges is final and no correspondence will be entered into.

All entries will be judged anonymously and considered for publication.

Please do not put your name, address, email or any identifying marks on the Word or rtf document in which you enclose your flash fiction.

No entry form is required.

Please enter by email to tearsinthefence@gmail.com through the Submissions page on the magazine’s website or post to Tears in the Fence with a separate covering letter and appropriate fee.

Entries must be accompanied by submission fees of £5 for a single submission, £7.50 for two and £10 for three. More than three flash fictions should be made on another entry.

Entries are only included in the competition when payment is received by PayPal, follow the instructions on the DONATE button on the magazine’s website, or by cheque, made out to Tears in the Fence.

Picture This: Tears in the Fence at 60

60 editions of Tears in the Fence, plus the Larmer Tree special issue – and if you have any copies, we’d love to see them.

We want to gather as many photos of copies/collections of TITF as possible for display at the Festival (October 24-26th in Dorset UK. See tearsinthefence.com/festival).

Whether you have one copy, 20 copies or even the whole lot (!!), please take a photo and send it to us:

A. Picture them any way you want – snap them where they stand on your bookshelves; pile ‘em high on your desk; or make any arrangement you like – even put yourself in the photo (a TITF selfie!)

Any information about yourself, e.g. the country you live in, thoughts on the magazine etc. will be entirely a bonus.

Now: get your phone and… SNAP!

Privacy and permissions
The purpose of the ‘Picture This’ project is to create a display board full of photos at the Festival (as part, by the by, of demonstrating the reach of the magazine).

We would also like to use some in posts on Facebook and twitter, and some or all on the website, as part of the publicity drive for the Festival. If you would prefer that we do NOT use your photo and/or your name online, please let us know when you submit your photo.

Many thanks again for your participation

Tears in the Fence cover archive

There’s a milestone coming up and some interest has been expressed in old Tears in the Fence covers. So, in the service of all things vintage, I thought I’d track down a few.

Following on from the cut-up illustration by Elaine Drake used in No. 23. Summer 1999, not long after I joined the magazine, and right away embarked upon what in hindsight we’ll call the ‘bright phase.’

This is the second cover from the Tears in the Fence archive. Here we’ve jumped years to, I think, the last incarnation before the present design. Issue No. 48 – one of the bridge series. In this case, the Forth Bridge, using a photo that I took on a visit to Edinburgh. And yes, I do think maintenance was being undertaken at the time.

I was looking on the cover, and then inside, for the date. Annoyingly I must have decided that a date was unnecessary or, more likely, that not having a date added to its timelessness. Hmmm! But, strike that. I’ve just looked on the spine and there it is: Summer 2008.

By this time the format of the magazine is A5, and we have dispensed with varnishing to give a more tactile feel, but it is still single colour print onto card. The font is Garamond.

Catherine McNamara’s Pelt And Other Stories

Catherine McNamara’s Pelt And Other Stories: Tales of Lust & Dirt (Indigo Dreams Publishing, 2013) examines the post-colonial relationships ‘between the world of tin and the world of glass’, in a sequence of gripping stories from a world of places. McNamara is an Australian, currently living in Italy, having previously lived in West Africa. Her stories are compelling, rich in detail, exploring implied and overt tensions that linger in the mind.

McNamara is impressive at showing the diversity of African women, struggling to move into new relationships, replete with the impact of lust and dirt. Her fiction allows the reader to see the new disquiet, connections, exploitations and displacements, between Africa and Europe. There is a strong sense of characters taking provisional positions, travelling far from home, in the hope of a better future.

The title story, ‘Pelt’, follows a Ghanaian woman flaunting her pregnant body before her lover’s estranged wife. The reader sees her German lover, Rolfe, stumble with the return of his wife, Karina, from Namibia. He has not told her of his new love. The story is rich in attitudes, connections and commercial detail, allowing a wider vision of the characters to emerge. The Ghanaian is a confident woman, aware of her physical attributes, in relation to her lover’s wife, and is clearly determined to use her womanly guile to secure a higher status in a highly stratified society. Despite some insecurity, she triumphantly swims in the hotel’s pool towards the Europeans in an act of self-assertion and transcendence. Rolfe begs her to go home.

The story is highly successful at implying the African’s assault on European decorum and her struggle towards a wider social acceptance.

Here’s an example of the fluency and fullness of McNamara’s writing from the story, ‘Young British Man Drowns In Alpine Lake’:

He nears Corinne’s face one more time. He is gleaning it for ashen

traces. Of which there are, for one who knows her. He cannot see

end of red, a drop in blood pressure as much as a realignment of

pluck, and that her huge white forehead, template for her sticky

righteousness, lies galvanized beneath its compelling shirr. They

say the hydraulics of the face are spellbinding. Corinne’s face is

giving him so much information I am appalled.

The steamy African backdrop impinges upon McNamara’s characters in ways that are perhaps subtler than, for example, Stefan Zweig’s African stories from colonial times. Africa is a place open to wider connections, subtler relationships, more diverse sensibilities, and the stories, some first published in Tears in the Fence, offer a range of examples.  Luca, a married Italian engages his West African lover, formerly a sex worker, to look after his elderly parents. Janet is seemingly happy to be used this way and finds his parents to be lost and disintegrating in the African mud. The story effectively shows her desire to please and to continue to rise socially as much as Luca’s abandonment of his parents. McNamara cleverly uses detail to reveal character. She is thus both succinct and thought provoking.

There is much more to savour in these stories that repay rereading as quality stories always do. I thoroughly recommend this engaging and enlivening collection.

Mandy Pannett’s All The Invisibles

Mandy Pannett’s All The Invisibles (SPM Publications, 2012) is an uplifting, grounded and coherent collection of poems that stem from a deep absorption in the history and mythology of the English landscape and natural world. It is a living awareness of the literary and historical associations of the people, animals and wildlife that live on or near the land. These diverse poems, wonderfully rooted in the things of the world that inspire and intrigue, converge into a pattern of existence that is at once both magical and lived in the raw.  The great strength of these poems is that they are open to the natural world in both its light and shade. Pannett, a regular contributor to Tears in the Fence for the past two decades, has a keen awareness of the potential and danger within the borderland of wilderness and a cultivated culture, impinged as it is by knowledge and shadow. Many of the poems point to a movement outside of ordinary relationships that stunts, liberates or neutralizes. This frisson undercuts the poems that offer sunlight to produce a continual counter-movement of broken bliss. The heart and body is at once, through reference to the Romantics, geology, toxins and decomposition, out of kilter with and vulnerable to the dialectic of the land.

The Hurt Of Man

world of ice, too thick at first

to shatter-cut while hurt of man

is seeding in the grass. Enough

to measure shadows with a twig

and cranberry notch, for time to turn around

silent girls he sees that those who plough

the viper fight for guts of fish. Now

a wolf devours the light …

This exceptional collection, written by a poet who understands her craft and is finding more than mystery in the world, is highly recommended.

Posted in Books, English Poetry and tagged All The Invisibles, Mandy Pannett, SPM Publications, tears in the fence. Bookmark the permalink.

Tears in the Fence 56 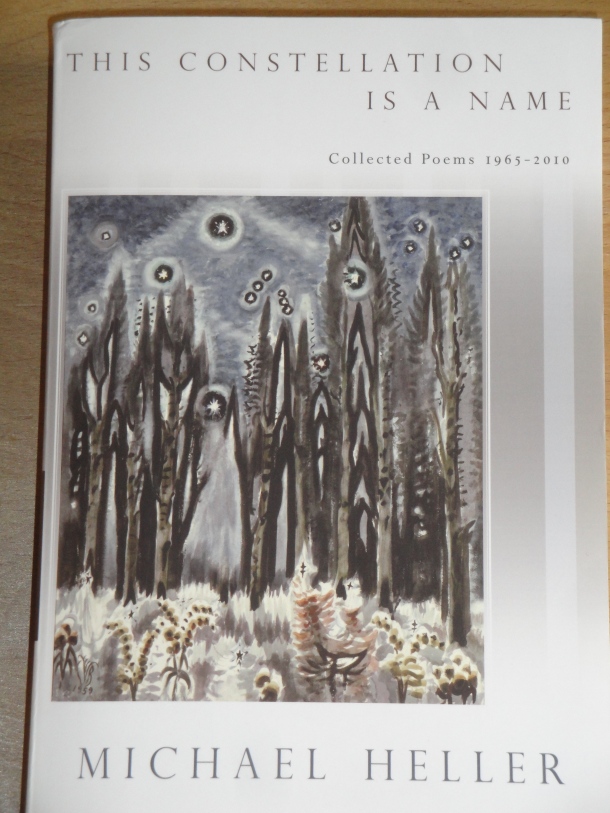 From his early spare poems written in Spain to the recent ruminative work exploring language, tradition (often Jewish and diasporic) and the self, this book collects four decades of Michael Heller’s “tone perfect poems” as George Oppen described them. Enriched with the detailed landscapes of the phenomenal world and mind, This Constellation Is A Name confirms Michael Heller’s place at the forefront of contemporary American poetry.

An article on Michael Heller’s work including his seminal book on the Objectivists, Conviction’s Net of Branches, his essays in Uncertain Poetries and his edition of Carl Rakosi, Man and Poet will appear in Tears in the Fence 56.

Posted in Books and tagged Michael Heller, tears in the fence. Bookmark the permalink.

We’ve been hearing rumblings of this for the last year and a half and now it looks like it’s finally coming to land. Spearheaded by the poet Simon Armitage this promises to the biggest poetry event in the world. Ever. Certainly, it feels like the most ambitious. Can anyone say, United Colours of Poetry?

Poetry and the phrase “all human life is here” are natural bedfellows but this case, where a mentor poet resorts to extreme measures in order to get paid, is particularly bizarre. Read more in the International Herald Tribune.

Posted in Uncategorized and tagged International Herald Tribune, Poetry, tears in the fence. Bookmark the permalink.
← Older Posts
→
Tears in the Fence
Blog at WordPress.com.
%d bloggers like this: